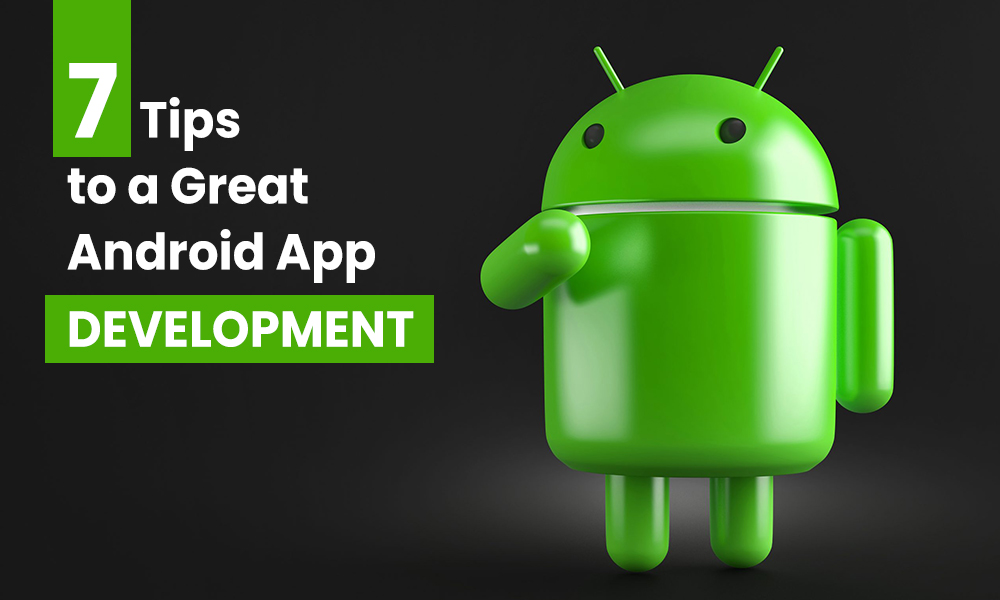 Are you planning on expanding of business to further markets? If that’s a yes then the best thing you can do is making an app. Now you must be thinking what made me so certain about the choice. Well the answer lies within the era we all are living in.

Whether you believe it or not but every other business out there has its own application irrespective of their industry venture. The point is, having an app for your business has its own perks, first of all it is a great way to get in touch with consumers/users.

Android on the other hand, is one such platform that has made things easier for businesses and developers to launch an app and get benefits from it in the easiest way possible. In fact, it has been found that almost 80% of the smartphone industry is covered by Android, which makes this platform a go to operating system for mobile app development. Here in this article, we have discussed 7 tips which you can implement in having a flawless Android app development procedure. So if you planning on making one, then this might be the best article for you.

The first and foremost thing which you should remember in Android app development is naming your app and that too well ahead of time. Yes it is little, yet the most important property of an app. Google’s Android advertise uses a unique bundle name which is utilised in order to recognise your application among the millions of apps on the Play Store. In this stage, you have to save a name for application, as it is the first thing that your client will relate to.

You should know that Google has its own set of guidelines which is used to help developers design Android applications. Goes by the name of material design these guidelines are set so that all android applications behave and feel the same way while offering the uses with consistent UI/UX. As a developer, it is your responsibility to follow these guidelines so that the end user will be able to understand and enjoy the app without facing any issues whatsoever.

Carrying out research way ahead of the app development process is always a good choice and you should do it without any second thoughts. In order to make a successful application it is your responsibility to understand what users are asking for and what exactly could be the design for your application. Whether you believe it or not but it has been found that users just love when they are being heard by the app developers and take their feedback seriously. That just wanted whenever their voices are heard, there are great chances that they will continue using your application. Paying great attention towards the app reviews and making improvements accordingly will help your application to come out as an ideal that understands the needs of the users.

In order to design and develop intuitive looking Android application you will have to comprehend the Android showcase social economics along with that you should have the knowledge about how the market is divided. Kurnool to gain user attention, it is your job to make sure that the app you have made should turn out to be perfect in all major aspects. Considering the fact that smartphones come in various sizes, it has become crucial for app developers to design an application for every possible format, textual styles, and relevant resources.

These are such times where mobile manufacturers are offering users the best possible devices at minimal cost, which means your app should perform accordingly. The point is, nobody likes a laggy application that takes too much time to open up and requires too much space on their smartphones. With that being said, you have to make sure that your App matches the velocity and the overall size as these two are the most important factors that will decide whether your app is going to succeed or not. Incorporating irrelevant items and factors into the application is one of those mistakes that most of the app developers nowadays are commuting, this is the only reason why some apps tend to perform slow.

Being a dominating platform, Android allows flexibility use this application on various. For some this is a plus point, but with an app developer’s perception, this is nothing but a great issue. It is impossible for Android developers to test the app on different devices. So, to maintain consistency between devices and varying sizes, you should use density-independent pixels (dip or dp)  instead of pixels. By doing so, Android will automatically calculate the exact amount of pixels depending upon the size of a particular smartphone.

Never ever release your mobile application before testing it. Not running extensive tests on an application before it is delivered mistakes which was out there tend to commit. You have to make sure that your app is bug free and for that some steps have to be taken. Your application should be tested by carrying out alpha and beta testing in the second stage itself. Whenever you come across and inconsistency or weakness you can take certain steps to solve it then and there only and they should get fixed before the final release.

So those were some of the things which have been implemented in our development process, but if you’re looking for custom app solutions, then it is highly recommended to rely upon a trustworthy android app development company as it can offer you best possible services.